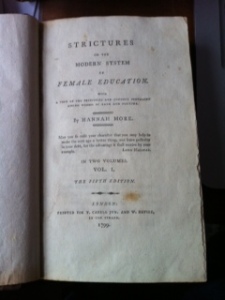 I posted recently on how a study of the social backgrounds of the various members of the Clapham Sect shows the complexity of the concept of the middle class in the late Georgian period. I now want to look more closely at how the writings of Hannah More give an insight into the way the language of class was evolving and changing in the period – which is another way of warning against simplistic terminology.

The full (and very cumbersome!) title of Wilberforce’s celebrated book, published in the spring of 1797 is A Practical View of the Prevailing Religious System or Professed Christians in the Higher and Middle Classes in this Country contrasted with Real Christianity. A year later Hannah More published her most influential conduct book, Strictures on the Modern System of Female Education with a View of the Principles and Conduct Prevalent among Women of Rank and Fortune. Unlike Wilberforce, she seemed to be neglecting the middle classes, a fact which puzzled the reviewer of the ultra-conservative periodical, The Anti-Jacobin Review (vol. 4, September-November 1799, pp. 198-9). The reviewer defined this group as gentry, merchants, officers and clergymen, thus illustrating the contemporary confusion of class: the lower ranks of the landed classes were placed in the same category as men in receipt of salaries or (in the case of the clergy) tithes. END_OF_DOCUMENT_TOKEN_TO_BE_REPLACED

The Summer Newsletter of the Kent Branch of the Jane Austen Society contains a summary of a talk given on by Professor Alan Downie on 20 March 2014 on the subject of ‘Jane Austen’s Property Plots’. In the talk Professor Downie rightly notes the error of describing Elizabeth Bennet as ‘middle class’ and in doing so highlights the common confusion on the subject of class in the late-Georgian period. The landed gentry and the upper middle classes often mixed socially and they frequently intermarried: Mr Bennet, a landowner, marries the daughter of an attorney. However, they did not belong to the same social grouping and their sources of income were different. Elizabeth Bennet’s modest fortune is derived from the rent from her father’s tenant farmers. Her uncle Gardiner (her mother’s brother) derives his from trade.

With this distinction in mind, most members of  the Clapham Sect have to be seen as firmly middle class, the exceptions being the Midlands landowners, Thomas Gisborne and Thomas Babington. On his father’s side,  William Wilberforce was the heir to a mercantile dynasty, while his mother Elizabeth (née Bird) was the daughter of a wealthy silk merchant. His birthplace in Hull testifies to his status. The Dutch-style house was large and comfortable and following young William’s birth, his father, Robert, put in a marble floor and a Venetian window. However, the counting house was next to the grand entrance and the back garden, which led to the waterfront, housed bulky hoists and wooden-framed cranes. Wilberforce was born above the shop, and he professed to be proud of his mercantile background. The income from trade enabled him to study at Cambridge and to stand for Parliament, first for Hull, where every vote was reputed to cost two guineas, and then for Yorkshire, where he took on the aristocratic landed interests and became the first merchant’s son to represent the county, the largest constituency in the country. END_OF_DOCUMENT_TOKEN_TO_BE_REPLACED