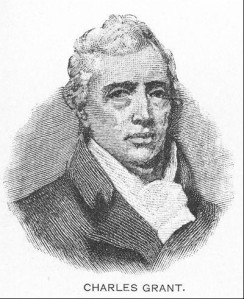 As the Scottish referendum draws near it’s worth looking at the Clapham Sect within a British, and particularly Scottish, context.

The Union of Parliaments of 1707 had created the United Kingdom. Scottish MPs now sat in the British parliament. Following this, as Linda Colley has shown, there was a conscious attempt to create a British identity, seen, for example in the creation of the British Museum and in the words of Rule Britannia’, written by the Scotsman, James Thomson. Some Scots took the opportunities opened up by the Union make their fortunes in the Empire, others to practise at the English bar. The most celebrated of these lawyers was the Lord Chief Justice, William Murray, Lord Mansfield, who in 1772 gave the important anti-slavery ruling in the famous Somerset case.

Whatever the rights and wrongs of the Union, the eighteenth century saw a flowering of Scottish cultural life.  The Scottish Enlightenment was a movement of European importance and had a huge influence on abolitionist thought. Teston, in Kent, described by Hannah More as ‘the Runneymede of the negroes’ was the home of the Scots Member of Parliament and naval administrator, Sir Charles Middleton. He appointed as rector another Scotsman, James Ramsay, whose ground-breaking accounts of the treatment of slaves in the West Indies drew attention for the first time to the human cost of cheap sugar.  In his books Ramsay took issue with his fellow Scotsman, David Hume, on the intellectual capacity and the cultural achievements of Africans, exposing in a devastating fashion the racism that lay behind so much Enlightenment thought. In his great abolitionist speech of 1789 Wilberforce built on Ramsay’s arguments and introduced Adam Smith’s concept of the impartial spectator, imagining him observing the treatment of the slaves on the terrible Middle Passage and judging it accordingly. END_OF_DOCUMENT_TOKEN_TO_BE_REPLACED